You are here:
HOMEOPATHICS & SUPPLEMENTS 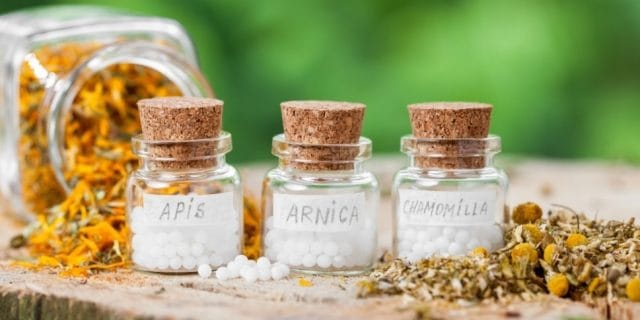 Allow me to relay a brief miraculous resolution of a sick kid.  I’m at privilege to detail this story as he happens to be my 8-year old son.  Adan woke up yesterday morning at 5am and came to my husband’s bedside complaining of an earache.  When he got up to leave for work at 5:30, Adan was crying, almost hysterical about his ear pain, “I need remedies!”.  I jumped up, with Adan closely at my heels, to grab the Aconite 7CH (Latin name Aconitum napellus) that I’d taken the night before for a brewing sore throat.  He laid down to snuggle in my bed and he tried to sleep. By 5:50, his complaints continued so I repeated the Aconite, which is usually indicated for the early stages of an acute illness that has come on suddenly (ideally dosing every 15 minutes; homeopathy is an energetic medicine, likely acting upon the water molecules of the body, shifting the vibratory state that drives the symptom picture. So frequent repetition of remedies may be required, especially when sourced from plants).

A few minutes after the third dose of Aconite-6:07am-and my morning meditation hopeless, I decided to snuggle with him. He coughed the hollow sounding cough that I recognize as a parent as a sign of imminent vomit. Oy. Sure enough, he announced he had vomited a little and so with the next cough I pushed him just enough so he wouldn’t soil the entire bed. Success! Sheets (mostly) saved!  We then got him to the toilet for a little more puking. Sorry for the graphics, but this is getting good, I promise. Now the remedy choice was Gelsemium 7CH to be precise, which I also had handy because of my own viral ache. Duly dosed and back to bed, with a towel down for extra protection, we snuggled up again where I got my own dose of love and gratitude from him telling me I was the best mama, ever (not sure there is anything better than this, by the way).

At this point (approx. 6:15), I started ruminating on what other remedies we may need.  The last time he had an earache, we had a miraculous cure with Pulsatilla 9C, but that was all the downstairs. Ok, not really far but what was really indicated by his symptoms this time? Which ear was hurting, anyway?  I hadn’t asked him. He started complaining of his ear again, so I decided it was time to find out which ear we were talking about, anyway. I also decided to get the fresh onion I’d just bought at the farmer’s market this past Saturday and wrapped half of it in cheesecloth, a fabulous old-time naturopathic remedy for ear pain.

Running downstairs afforded me the chance to get more remedies, but I opted for Chamomilla, not the Pulsatilla, because of both the ear pain and the stomach upset. By 6:35 I had dosed the Chamomilla and he tried to sleep with an onion balancing on his head.  Fortunately, the complaints were now more about the onion falling off his left ear, keeping him from sleeping. Within a few minutes he knew he was going to upchuck again, but this time, made it to the toilet.

With great relief from this, again we snuggled.  He no longer was complaining of an earache at all and said it didn’t hurt any more.  Wonderful. Let’s see if it lasts. Within a few minutes, when I was expecting a complete resolution, he said his belly hurt a little bit.  I decided to repeat the Chamomilla, which really may have been a bit hasty, because this is a remedy that is known for not needing frequent repetition.  After no more than 5 minutes, no about 7:00am, he knew he had to use the restroom. A quick no. 2 (presumably loose, but unconfirmed because he ‘didn’t look’-what!?  ‘You always have to look!’) and I swear he was CURED!  By 7:30, he was primed and dressed for school!

Now, while this was admittedly too good to be true and he did have a great day at school with no issues, the next day he had a little swelling in his right eye, which was crusty and red upon awakening and some sniffles.  Big deal! Still, in the event this was a brewing conjunctivitis, I kept him home. The ear pain returned nearly 48 hours after the first incident (so now, 2am) and this time we spent 3 hours hitting up the right concoction/remedy, but alas, at 5am, we did. None of the usual suspects for an exquisitely painful middle-of-the-night earache (Lachesis, Hepar Sulph, Belladonna, Chamomilla) were working, nor were other Classics (Pulsatilla, Mercurius, Lycopodium). Finally it was Kali sulph that allowed my little guy some sound rest and no more ear pain.

So, we averted an ear infection, and ended up with a regular bit of nasal congestion and drainage of clear fluid from his right eye.  It was all in the end very mild with most of his congestion at night and almost completely resolved after 2 days.

If only I had kept up on my own remedies after the initial day of my sore throat, as with many adults, it can dissipate but then come back if we don’t keep the drainage/detox supports going.

We advise ALL PATIENTS learn how to use acute homeopathy for these minor and noxious complaints that creep up in the wee hours of the night.  We have a wealth of resources that help individuals decide on self-selections and the beauty of this method is that it is completely safe, non-toxic and helps restore normal immune function and serves to reverse chronic disease.  Big claims that come with 200 years of empirical data to back it up. Only way to know is to try it and see for yourself.

Fever and Acetaminophen Use
June 6, 2020